Trying something a little different for this post. Rather than all of us individually posting on the same thing, we’ll capture our experiences in a single post. Comment and let us know what you think.

Today, we went on the Tokyo Discovery Bike Tour! 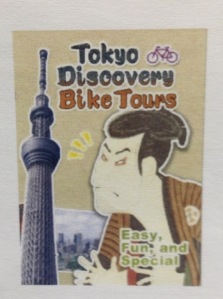 Our family met the guide, Mr. Akira, in a sort of garage place (that wasn’t connected to a house), where he kept the bikes. Mom, Dad, and Trey all got big(ger) green bikes, and I got a smaller blue bike. 🚲We started off in a neighborhood called Akihabara, and then biked for 1.9km till we got to Ryogoku – Bashi bridge.

It was super pretty there with such clear water and a beautiful skyline.🌇

After we stopped at the bridge for a water break, we continued on for 2.5km until we got to Ryogoku Kokugikan. Ryogoku Kokugikan is a venue for contests in Japan’s national sport, sumo. Three of the six official sumo tournaments that take place nationwide each year are held here, in January, May, and September.📅📆

Then, after we looked around the museum part of the stadium, we rode 5.8km to the Tokyo sky tree! It was built in 2012 and is 634meters high-the tallest free standing tower in the world!🌍 🌎 🌏 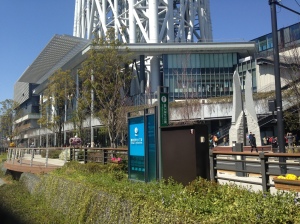 Next, we continued on for 6.5km till we reached Sumida park. A great spot to go see cherry blossoms!🌸 There are about 1,000 cherry trees there. But, it isn’t really a great time to see them now though, not very many blossoms, but Mr. Akira said most of the trees will be in bloom if we come back in the next 5-7 days.🌸 (which, I hope we do!)

After we took a water break, we kept on riding and did a couple of more stops, but, I can’t remember what the names were (they weren’t very interesting to me😁)! 😝

Well, that’s most important stuff (to me) that we did yesterday friends!😛

Hey guys, today we got to go on a bike tour! First we had to find the place, where our guide gave us the rundown of our route.

We went to the sumo stadium, the sky tree, and tons of parks! After we got back we met some relatives who were visiting Japan with us. By that time I was falling asleep so after a while we went back to the apartment and fell asleep. See you guys later!

I think you get the idea that we all loved the bike ride. Hands down, the coolest way to see a city! To get to the bike ride, we had our first chance to ride the subway. Yes, it was a bit stressful trying to decide exactly which ticket we wanted to get, and yes, the waves of people passing us in the all black business uniform made me feel like I was in a science fiction movie, but we made it on to the right train and off at the right station on the first try.  Hooray!

I really enjoyed our time biking and the numerous stops we made. As we rode, we passed the Fine Arts University and Tokyo University, both of which were holding commencement ceremonies with men in nice suits and women in traditional Hamaka dress.

After a short rest back at our room, we headed out to meet April and Lowry, Paul’s mom and step dad. We wandered around Ginza together and explored the many food vendors, meats to sushi to mochi and fancy chocolates, on the bottom two floors of a department store before deciding to eat at a cafe on an upper floor instead. (There were no places to sit or stand to eat all of the food being sold on the lower floors.)

We finished the night at a coffee and dessert place called Choco Cro where we indulged in some yummy treats! Hopefully you got to see Kamaile’s video of her devouring her dessert.

Overall we are loving this country. It is overwhelming to navigate to crowds sometimes, but we have a pretty good system of Paul leading the way and me bringing up the rear with the kids in the middle. It is a big adjustment to getting used to walking on the left side of the sidewalk, passing on the right, and looking for cars approaching from the other side.

Looking forward to seeing more of the country in another way tomorrow: Mt. Fuji and Lake Ashi by bus and bullet train.

First things first, let me just say that my quads and butt are sore! The all-day ride was amazing, but 20-kilometers and a couple hills made for an achy morning today.

We found out about Akira and his company through Trip Advisor and decided to give it a shot with the hope that we’d be able to get a taste for the city that neither tour buses nor trains could provide. Thankfully, our hopes were not only met, but FAR exceeded.

We were very fortunate to have Akira as our guide. He was knowledgeable and provided not only the “typical” facts, but also shared other interesting tidbits along the way. Akira was patient as we slowly became comfortable with weaving through often extremely congested car and foot traffic with our bikes. As cyclists, I would consider us remedial, at best, yet we managed to feel relatively safe in short order. Akira was also very flexible in giving us choices along the way. The pace of the trip was just right for our family.

Finally, on a day that featured a series of amazing moments, one of the best was when we stopped in Yanaka (Taito-ku) to visit an “old world” market. We picked up bento boxes and decided to eat in a little neighborhood park were some school-children were playing a netless form of badminton. The children initially shot a few curious glances our way–I’m guessing because we’re foreigners and had 2 kids with us–but they quickly decided that we were harmless enough for them not to mind. Trey hung out near the kids for a few minutes and even chased down a couple wayward shuttlecocks, but never actually tried to engage. We didn’t quite stay long enough for him to take that next step, but it was easy to imagine him being able to figure out a way to connect with people from a completely different culture even without the benefit of a common language. We’ll get there soon enough… 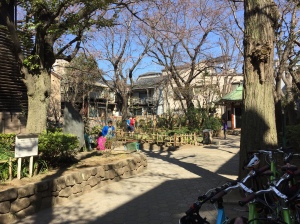