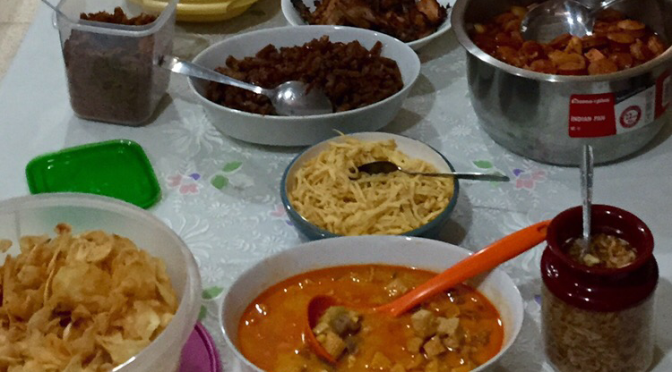 On Saturday we visited Josie, the Kowalski’s friend and language tutor, and her family! The street that they lived on looked like many of the neighborhoods around here, with a mix of broken concrete and rubble. When we got inside, we learned that the house had been recently remodeled, but the main room was designed to look like the old house that it has been many years ago. The walls looked like many kids had already had their effect on it with nicks and stains all over the place. It was really cool!

Once inside, we were greeted by Josie’s family and a FEAST of food. I thought they were celebrating Jesus’ ascension into heaven (aka Ascension Day), but they were actually celebrating Josie and her mom’s safe return from a 3-week Europe trip. We asked Josie who made the food, and her mom had made it all! Turns out the mom had once been a caterer during part of her career.

Throughout lunch guests kept arriving. Somewhere in the middle of the meal one of Josie’s friends, Pauline, arrived (you will hear of her later).

There were many different foods. There was Nasi Kuning (yellow rice), Nasi Udok (white coconut rice), noodles, and many other assorted foods that were all very tasty! One of my favorites was the beef or chicken (I don’t remember which!) that was decently spicy. Another was the small noodles that were yellow/orange and it was amazing!  I think it was called Bihun. I really hope I can find it at home.

The next day, I actually woke up sick, but I’m sure it wasn’t related at all. My stomach hurt and I also felt nauseous, so everyone went to church except me. I basically just stayed at home and slept/read the entire day. I was not happy with this. Miss Rosemarie stayed with me through the day and I was very thankful for that.

The next day I felt a lot better than I used to, so I got out of bed. We basically had a chill day on Monday since I was still recovering, so nothing much here.

IT HAS BEEN OFFICIALLY ONE WEEK ON THE ROAD!!!

I can’t believe that I have gone one week without a continually hot shower! No, seriously, I haven’t had one good hot shower for a whole week. It stinks. I have only had hot water once for fifteen seconds, but it’s not really anyone’s fault. We believe the reasons are that we only have tiny water heaters and that most people who live hear take showers in the evening because you get sweaty during the day.


On Monday, we went on a HUGE walk through town. We went to a store called ACE (just like back home) where they sold a bunch of households fix-its, everything from showerheads to toilets to basketballs. They had a ton of stuff. They even sold POPCORN if you wanted to eat while shopping. At the very front there was this restaurant called Chatime and we had cold tea with tapioca bubbles in it.

We also went to a bunch of other stores and other places, but I don’t remember the names, so 😔. On the way back we took a taxi/taksi and I sat in the front seat since it is proper for a male to sit in the front. It was really exciting since our taksi driver knew how to cope with the traffic here, with the monkeys riding bikes, and the motorcycles weaving in and out of traffic.

I know I’m a week behind, but I’m working on catching up and being more timely.