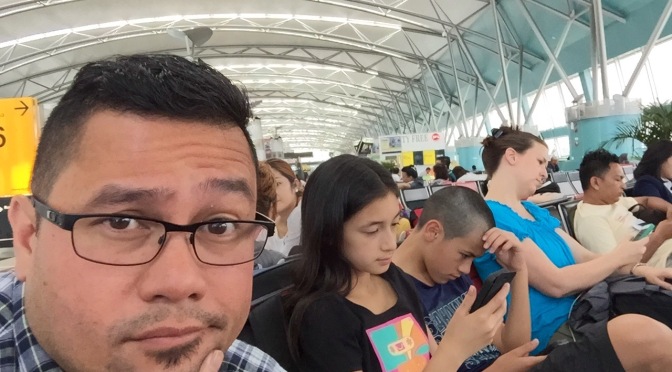 Today’s experience on the way to, as well as at the airport was a strange one!

We arrived at the airport in a shuttle that delivers us from our hotel. Picked up at the lobby near the front gate, we made our way around the hotel to the other lobby to pick up more passengers. So far, so good.

Then, the driver proceeds to leave the driveway and heads across a field to a dirt track. Wait…this wasn’t the way we came in yesterday! After a couple minutes of off-roading, a guard opens a big gate in the wall and we turn into a (this is a generous term here) road. Our shuttle is a pretty large vehicle for this road, which would definitely be a one way road at home. Then, as we approach a corner, two big construction trucks come barreling our way. All the drivers slam their brakes and inch to the sides of the walls on the road. I was really not convinced there would be room, but after after slowly crawling and maneuvering we managed to pass by with at least an inch to spare. [Note: an inch of clearance does not appear adequate passage when one is in a large shuttle van passing a garbage truck style vehicle!]

After a few more tight passes (one involving a bridge with no side walls and another large vehicle), we turn into yet another dirt “road” and scrape the gate as we turn off. At this point I leaned over and told Trey that I was really glad we were on the way to the airport: if someone had picked me up at the airport and taken this route to the hotel, I would have thought for sure that we were going to be bad news headlines. He totally agrees. Eventually we turn back into a track that we would all acknowledge as a road and are delivered uneventfully at the airport.


Upon arrival, we checked in at the kiosk and pass through a light security screening. We were three and a half hours early for our flight and do not see a gate assignment so we decided to sit and have a coffee. We wasted some more time and played each other in our new favorite family pastime, the Monopoly App.

At two hours to our flight, we still don’t see a gate listed for our flight. Hmm. Strange. Well, we decided to go ahead and go upstairs to where the gates are.

Oops! We haven’t gone through the real security OR immigration yet. With hearts pounding a little faster, we hurry over.

Thankfully, there aren’t many people in line at all. Only two people in front of us in the immigration line and we pretty much walk right up to the screening area of security. We are so practiced at this now! I am very proud of the kids and how they have been able to stay organized and go right through with minimal fumbling with gear. Yay us!

Phew, we’ve made it through, no problem, plenty of time to spare. There are lots of seats around. Paul checks at the desk to be sure we are in the right place. OK, we can relax again. After about 40 minutes or so, I walk over to the window to check things out. Huh, I notice that I only see airplanes from a different airline…then I notice that there aren’t any jetways attached to the building. I do see a bus driving around the tarmac with the airline label on its side. I wonder how this is going to work?! I walk around the area and find a flight of stairs that are roped off and a turned around sign indicating our airline and boarding rows. Just then I see a group of flight attendants approach and had down those stairs. Ok, maybe we are in the right place.

A few minutes later we hear an announcement that our flight will be boarding from Zone 5. Panic sets in: there are only even-numbered zones here! We quickly run over to the desk at Zone 4 along with a couple other English-speaking passengers. They laugh at us. There is no Zone 5, they say. Uh oh! We zip over to the desk at Zone 6 and ask again about our flight number. She smiles, answering that now is the time to board and indicates to top of the same stairs I mentioned earlier. Um, I wonder what happened to Zone 5? Maybe just a translation error? [Note: I (Paul) most definitely heard “Zone 5” as well.]

We are flying in Priority seats this time and get to go through almost first. Down a flight of stairs, we arrive at a door to the tarmac at an obvious loading area, but no bus. We wait a few more minutes and one shows up. We climb aboard and ride around for several minutes to the new terminal that is under construction. Yes, the terminal is under construction, but planes are all lined up outside like it is already completed. The kids are so excited that we get to climb up the stairs to load the plane…just like President Obama! Or something like that.


Thankfully our flight was uneventful with very cheerful flight attendants! Even though with every bump of extended turbulence I panic a little and think of another Air Asia flight that passed over this area of the world not long ago…

What a weird airport morning. Sometimes you just have to laugh at how things eventually work out and thank the Lord for His protection!

Now, we turn our sites on Thailand, beginning with Bangkok. I hope they are ready for us crazy #SeattleBundas!