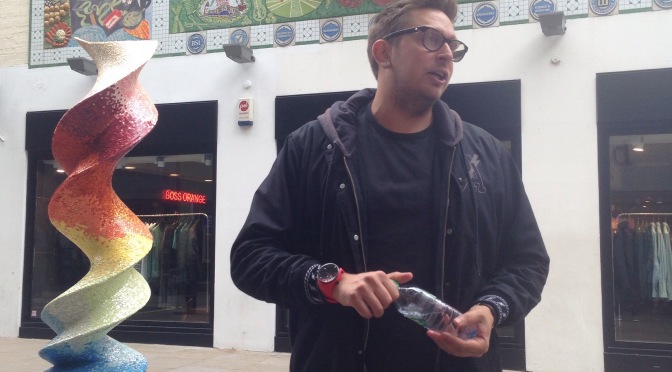 Today we did a free walking tour in Soho, Picadilly, and Chinatown in London, UK! 🇬🇧🚶🏽🚶🏽🚶🏽
In the morning we left our Airbnb around 9:30 and walked to the metro, which, here in London they call the “tube”.🚈 We rode the tube into Picadilly Circus where we met Gregory, our guide for the tour, outside a donut shop. 🍩
We walked through Picadilly, Chinatown, and Soho. These are a cuople of the interesting sights we saw:
1.

The Bag O’ Nails theatre! An old theatre that used to have shows every night, but now it is a private venue. One thing Gregory told us here was that if there is a blue plaque somewhere, READ IT!😋(Cause they’re special😅) At this place, these were the blue plaques👇

The first plaque read that, here at Bag O’ Nails venue on May 15th, 1967 Paul McCartney met Linda Eastman. Cool! I love the Beatles!😄
The second plaque read that, here on November 26th 1966 Jimi Hendrix first played here. Gregory told us that Jimi came to the venue thinking he was there to watch a show, but then, he heard his name and was called up on stage!😆 There, he played his right hand👋 guitar🎸 upside down for the show. (Jimi was very poor at the time, and when he was 15 his dad saved up to buy him a guitar, but it was right handed, and Jimi was left handed! So Jimi played his right hand guitar upside down.😛) After the show, someone came up to Jimi and told him “That was one of the best shows that I’ve ever seen.” That someone was Jimi’s idol, Eric Clapton. Wow! That must have been so awesome!😄
2. 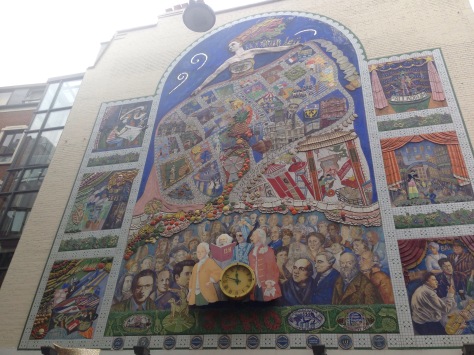 The Spirit Of Soho mural! St. Ann’s dress is the neighborhood of Soho with the streets,🚸 resturaunts,🍴 shops,🏣 and everything else. On the bottom of the mural, there are four people standing in front of a yellow clock. Those people are (from left to right) Mozart, (Mozart lived in Soho for one year from age 8 – 9 while he was doing his tour of Europe.) Karl Marx, (He has a big red book in front of him. He appears to have a red thing in his left hand. It used to be a can of Coca Cola but the mural is so old that it fell off😓) Theresa Cornelys, (Opera singer and actress) and Casanova. Every hour Casanova blows a kiss to Theresa, (thats why his mouth looks so odd) and Theresa winks back. (thats why her eye looks so odd) We were there for the hour and we saw the Wink-kiss exchange and it looked so odd!😳😂

So, those are some of the things I saw on our London walking tour!
✌️ ⭕️⛎➕ (aka peace out)