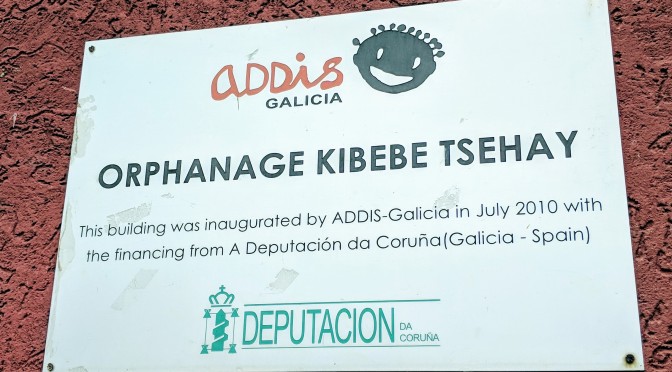 We visited 2 government-run orphanages and a homeless “camp” here in Addis Ababa today.

Kibebe Tsehay Orphanage
The first facility was for newborn to 8-year old children. While apparently in far better condition than it was less than a year ago, the place was far from what that I’d consider conducive to raising thriving children. When we walked into the room where the infants stayed, I locked eyes with a 2-month old boy with big, beautiful eyes and a HUGE smile. About 30-seconds later, I looked at the dilapidated poster above his crib and realized that his name was the same one shared by my great-grandfather, my father, my son, and me: MATIAS. I was immediately reminded that I should feel nothing short of grateful for where I was born and raised. I left the room immediately to avoid breaking down right there and then.

We moved to another part of the facility and entered a room of 1- to 2-year olds. To our surprise, the children were already waiting for us–standing and facing the door expectantly. As soon as we walked in, one little boy rushed past all of us, latched onto Gabriel’s leg, and begged to be picked up. Gabriel hesitated, as doing so is rarely encouraged in these settings, but our local hosts gave him the green light. The boy’s eyes lit up like a Christmas Tree and he grinned from ear-to-ear. Within seconds, Marisa had two kids in her arms, and soon we were all surrounded by little humans craving affection. One little boy with a red, racing car hoodie leapt into my arms. As I picked him up, I noticed that his diaper was heavy and pants were damp. I didn’t even care. The boy did his best to communicate with me via pointing and gestures–I think he was trying to get me to give him a water bottle from atop one of the shelves. We eventually had to move on. I was the last one from our team to leave the room and will never forget seeing the disappointed little faces; and, even worse, hearing the children’s wailing screams as I backed out of the room.

Kechene Orphanage
We hopped back into our van and made our way down the road to the orphanage for 8- to 18 year-old girls. The living conditions were a little better than the first facility and a couple of the older girls seemed very well equipped to discuss and advocate for their needs as they faced aging out of the system and returning to the outside world to fend for themselves. Any sense of desperation was much more subtle than with the little children at the first orphanage. The mood changed quickly, however, when we started to leave. Suddenly, one of the girls latched herself to the van and did everything she could to prevent us from driving away. The girl was probably 14–the same age as my daughter–and we learned that she had recently named herself Julie in the effort to make herself more appealing to foreigners. She believed that foreigners would be more willing to help a girl with a Western name that only ate Western, not Ethiopian food. There was so much raw emotion–those 5 minutes felt like an eternity. As we began pulling away, I watched the older girls try to get Julie to put on a smile and wave politely to our team. In that moment, I said under my breath, “Julie, please keep fighting for yourself and don’t ever stop believing that your forever family is out there ready to fight for you, too.”

Lebu Homeless Camp
Our last visit was to a homeless camp filled with 100+ families living in 10’x10′ shelters made of corrugated sheet metal. On the outside, the conditions were pretty bleak. Dusty. No running water. Limited electricity. Raw sewage running down trenches in the middle of the dirt roads. However, we also saw some signs of hope. We meet a single mom with her children–both of whom are sponsored by our partners, AGCI. Because of the support received, the mother is able to keep the kids at home, send them to school, and also receive access to critical .medical assistance. She proudly welcomed us into her home and I was struck by how peaceful and even comfortable it was, all things considered.

We ended the day with a nice Ethiopian dinner show. The food, drink, and entertainment was as good as I’d hoped, but it was difficult to think of anything else but Matias, the red hoodie boy, and Julie.