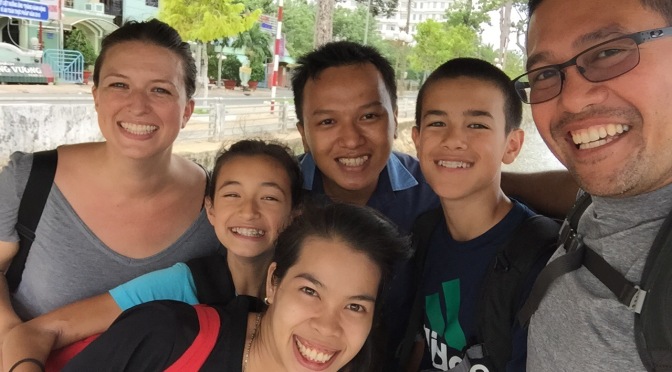 Go and visit. Stay and connect. This is one of the tag lines (or themes) which we’ve used as a family to help guide our journey from the moment we first decided to embark upon our Family Sabbatical. However, going into our recent Indochina Peninsula Tour, we knew that the jam-packed schedue (4 countries, 15 cities in 25 days) would make connecting with locals challenging.

One of the unexpected joys of the tour turned out to be the local guides whom served as our Hosts in their respective cities/regions. They were our Teachers, providing cultural and historical context to the many sights, sounds, and experiences. They were our Guardians, giving expert local advice on how to avoid shady people, places, or situations. Some even let down their guards enough to become Friends whom we look forward to someday hosting in Seattle.

Gai was our guide in Bangkok and Ayutthaya, Thailand. She was energetic, she smiled with her eyes (you could even tell through her sunglasses), and her manner reminded me of some of my Aunts in the Bunda Clan. Gai was a proud Thai–she even mentioned that she wished the country were still called “Siam” like it once was. She lived in the U.S. (Virginia) a few years ago, but decided to come back after 3 years because she missed her country and “her people.” Gai was a devout Buddhist. Her knowledge in that arena came in handy as we visited more temples during our time with her than at any other time on the tour. Gai quickly gravitated towards Kamaile took extra care to ensure that she understood what she was seeing.


Kay was our guide in Chiang Mai, Thailand. At first, I assumed that she was an introvert, but I realize now that any guide would seem that way to us right after Gai. Kay actually had the same laid-back demeanor that many of the people in Chiang Mai seem to possess. Like many guides, she herself is an avid traveler. Kay took particular interest in Trey–commenting a number of times on his height, as well as the fact that “many Chiang Mai girls will be interested in him when he comes back in a few years.” Too funny. Kay was paricularly good at helping us get unique experiences (Tigers!) despite the fact that we were in a number of tourist-infested places.

Sengphone was our guide in Luang Prabang, Laos. He lives with his wife and kids in Luang Prabang, but is originally from a mountain village near the Chinese border. When we first met Sengphone, I remember thinking that he had the calm, gentle disposition of a monk. Shortly thereafter, we learned that he, like many poor boys from the countryside, joined a monastery when he was 13. Sengphone went on to explain that his primary motivation for joining was Education (there were no schools in his village), followed by bringing prestige to his family, and finally for religious purposes (his own). One thing I really appreciated about him was the way he actively partipated and/or taught when we visited local craftspeople in their villages. Sengphone came across as someone who could actually make the mulberry paper or silk cloth himself, not just talk about it. Finally, being a father himself, Sengphone was also very good about reading the kids’ moods and energy levels–suggesting modifications to our time in Luang Prabang to better suit our needs.

Note: Sengphone was part of a previous post “Laos: I Gotta Get, I Got-Got Ta Get It.“

Jay was our guide in Hanoi, Vietnam. We arrived pretty late in the evening prior to our Hanoi Bike Tour, but he still took it upon himself to greet us and try to gauge our excitement about the next day. His given name is Giang, but he introduced himself as “Jay, like Jay Z.” Needless to say, I had a good feeling about him. Our bike tour itself was tough. We nearly quit after Kamaile crashed within the first 20 meters of our ride out of the Old Quarter. The fact that we were already exhausted, fighting crazy heat and humidity, and in a very hectic, new place was not a good combination. After about an hour of riding, I was about to call it a day. Jay suggested that we just sit and chat under a tree to cool off a bit. In the next 40 minutes, we engaged in an amazing conversation about Jay’s hopes and dreams for the future, his struggle to keep up with his peers (the Rat Race is alive and well in Hanoi, too), and the role of faith (or lack thereof) in his life, which he initiated 100%. He then invited us to ride to a neighborhood well off the beaten path to see how he and “most people in the city live.” I believe the only reason he felt comfortable enough to to bring us there was the very unscripted conversation that we’d had just before. What a privilege!

Thuy was our guide in the mountain city of Sapa, Vietnam. She was easily the most reserved, even close-vested, of all our guides on the tour. Thuy fascinated me for a number of reasons: 1) She was from the Red Dzao tribe and dressed in traditional clothing every day, whether or not she was working; 2) She talked openly about her views on the courtship (previously non-existent, now Facebook vetting is acceptable) and marriage practices for the Dzao, as well as the many Hmong tribes in the area (still arranged, but at least kidnapping your potential bride from another village/tribe is no longer common); and, 3) She shared less about herself than any of the other guides on the tour despite our best attempts. During our last 30 minutes together, she finally spoke a little about her husband and son.

Toan was our guide for our day trip to Ky Son Village (outside of Hanoi, Vietnam). He was a humble man whose parents met in another village while his father was part of the Viet Cong. As the story goes, once the Vietnam War (or “American War” as they call it there) was over in 1975, his parents chose to move to this farming village to start their new life. Toan grew up as a farmer as well, but when a businessman from the city bought up property in his village to create a museum/resort for visitors, he jumped at the opportunity to earn money in a different, less physically strenuous manner. His English was good, as is, but even more impressive to me when we found out that he learned primarily by talking to visitors (as opposed to the formal training that each of the other guides received). Toan was proud of his village and that pride was only surpassed by that which he felt for his 15 and 10 year-old daughters, Ngoc an Linh. He even brought us over to his house for a few minutes so we could meet them and share tea together.

Ty was our guide in Hoi An, Da Nang, and Hue, Vietnam. He was a nice guy that was very proud of Central Vietnam–especially his hometown of Hue. More so than any of the other guides on the tour, Ty took a long time to grasp that we were not the type of people to passively just go wherever the itinerary said (or, worse, wherever he wanted). Ty also had a couple quirks which were sometimes irritating, and at other times funny.  He did not seem to prefer talking and walking at the same time. Coupled with his habit for repeating a concept 2-3 times at minimum, this meant we spent long stretches of time standing in the hot sun listening to him lecture through a thick Vietnamese accent. The poor kids really struggled to pay attention. I think he finally got the picture on the 2nd day, when I would put my arms around the kids and just start walking off in a direction as soon as he started repeating himself. To Ty’s credit, things started to go much more smoothly after I took him aside a couple times to specifically explain that we had limited attention spans and only enough energy to see the specific things which interested us.

Lot was our guide in Ho Chi Minh City (Saigon), Vietnam. The amount of fun we had with Lot may have even surpassed our experience with Jay. She was quirky, funny, and a bit of a jokester. At the end of our first day, she said flat out that we’d be seeing another guide on the second day. When I tried to give her a tip, she quickly ducked away with an awkward goodbye. Lot then returned the next morning but introduced herself as Lot’s sister and tried to keep it up for a few minutes. What?! LOL Lot also treated Kamaile and Trey as if they were her niece and nephew–with that familial mix of fun, protectiveness, and even some correction when warranted. I know that she made the kids’ experience that much better.

Proney was our guide in Siem Reap. Heat have been the most compelling of all of our guides. Like Sengphone, Proney spent time during his teenage and early adult years as a Buddhist monk. Like Toan, war was a part of Proney’s history–just much more recently. When the Khmer Rouge was in power, nearly 1/4 of Cambodia’s population was killed. Most of those people were the well-educated (doctors, lawyers, businessman, and civic leaders); and, in the eyes of Pol Pot, capable of organizing resistance against the Khmer Rouge. As time went on, young boys (especially those from poorer families) were often forced to fight for the Khmer Rouge. For a short time, until he escaped, Proney was one of those soldiers. Risking great peril, he eventually snuck away and joined the relative safety of a monastery where he learned about Buddhism, as well as the English and Japanese languages. Proney mentioned that many of his immediate family members were not so “fortunate.” His father was shot by soldiers one day while farming–apparently mistaken from a distance as a resistance fighter. Proney also lost 2 siblings to some of the many land mines which still plague parts of the country. Unbelievably, he lost 2 more siblings to starvation. With very little outward emotion, Proney told me that his story was not special; that “everybody lost family.” Proney now treats his profession as a calling to help bring prosperity (via tourism) and stability (via educating others) to Cambodia. Stunning. Heartbreaking. Inspiring.

Thank you to ALL of our guides for your part in making our Indochina Tour a life-changing experience. Thank for giving us glimpses into your lives and teaching us about your cultures. We are forever grateful!